A week ago today….we found ourselves sitting on a couch, in an office, speaking to a marriage counselor. This is our normal.

Maria, a 50-year-old, Catholic – Hispanic woman – was the one who took us thru 3 months of intense pre-marital counseling. We loved her and we loved the process and we committed that we would continue to see her throughout our marriage. So on this night, it would be our 4th session for our married year, and her first question to us was:

“You’re about to celebrate a year!! How would you rate your marriage on a scale of 1-10; 10 being the highest.”

Bobby and I looked at each other and he says – “you take this one, bay…”

Not so fast buddy….I wanna hear what YOU have to say…you can imagine the squirming and thumb twiddling that was going on beside me…I was enjoying the uneasiness he was feeling – I was anxious to hear what he had to say…I already knew what my number was.

“I give us an 8!” he finally says….I looked at him and laughed….that was my number too…an 8. Maria was pleasantly surprised. Most of the couples she sees don’t make higher than a 4 in their first year. We were doing pretty good!

Thinking back on our first year, there are a few things that I believe contributed to our success, other than Maria and GOD:

Those two are self-explanatory…having separate bathrooms and closets has accounted for about 80% of arguments we DID NOT have. Living with someone is tough…and taking that commitment means you have agreed to merge your lives, your families, your worlds – and your nasty habits…its written in my gratitude journal…that I am thankful for both of those things that truly are necessities – that most couples don’t have. If we had to share any of the two – this would be a different post.

There are some other secrets as to how we survived our first year of marriage…like trust and respect…but the most important to us is PRAYER. I grew up in a household where both of my parents served – the SAME GOD – together. And I’ve seen couples that are on two different pages when it comes to their beliefs and their spirituality. I am grateful EVERY NIGHT that my husband chooses to get on bended knee and take the lead in prayer, without me asking! There’s never an argument or a disagreement on going to church. It’s a given in our home. I feel safe knowing that he has his own relationship with GOD and puts him at the forefront of our marriage. I grew up hearing the term “equally yoked” in the bible – and after all of these year, I finally experienced what that meant for myself.

Then there is COMMUNICATION…there are things that happen in the course of your journey with another human being – that they don’t always share with you…something said that hurts, something not said that irks you….little things that may grow to bigger things. In my marriage, its hard for Bobby to communicate at times – he prefers to shut down and hold it all in (as most men are). I’m kinda black + white – let’s get it out in the open and deal with it – type of chick (as most women are). But I’m grateful that we have someone who can help us to talk thru any issues that we have – coming from a neutral place. Bobby wasn’t doing cartwheels when the idea of marriage counseling first came into play…he came in kicking and screaming, in his mind. Our very first session went pretty quickly….I did ALL of the talking. At the end of the session, Maria kindly asked that I stay home next time and that he come alone.

The sessions got better each time we went and Bobby was at the point where he looked forward to seeing Maria. Even just a few months ago – I knew something was bothering him and I asked him several times to tell me what’s on his mind…he resisted and said – “I’ll just wait till we see Maria.” I then asked “why would you pay to tell someone what’s bothering you – when you could tell me FOR FREE??!!!” We both laughed and he realized there was truth in that statement – and he opened up and we had a great conversation…that was a big step in our marriage because the reality is – all of the tools that Maria had been sharing with us – was put into practice in one conversation…and it was a success. Marriage counseling to us has been our form of preventive care.

So today we celebrate our FABULOUS FIRST…I’m thankful for a memorable and fun wedding day that I can reminisce about…But what I’m most thankful for is a fabulous first year of marriage – surrounded by friends and family who support and encourages us in our journey.

Here’s to year two…any many more! 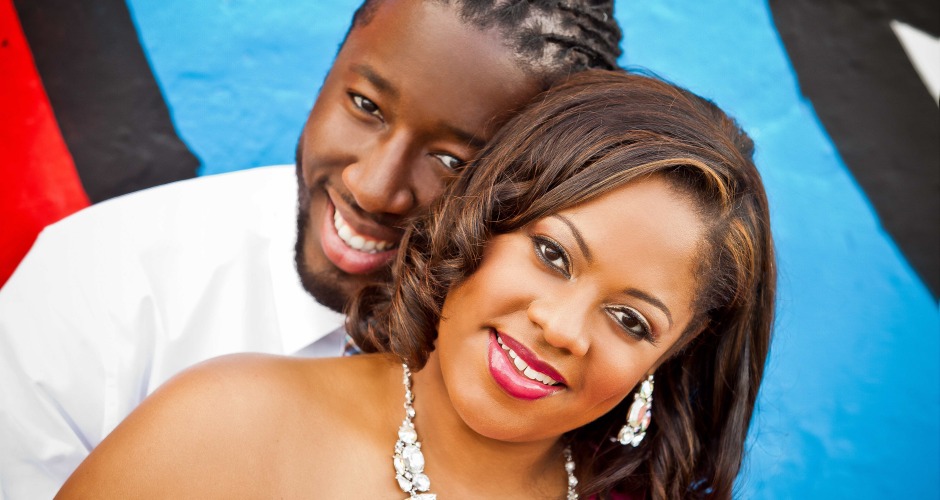 Its been four years since Bobby and I hung out randomly one night…me barging in on his plans that he was making with my assistant (one of his boys-Nile) to hang out at a local lounge/restaurant….it was the week before a major fundraising event that I managed for the Overtown Youth Center and I was stressed and needed to get out….

Overhearing them make plans for what sounded like a “boy’s night out” – I not only inserted myself into the plans, I also requested that he come pick me up because I wouldn’t feel like driving…he obliged.  We barely knew each other, but I figured that Nile was going to be there so I would be okay.

I knew Bobby was a cool guy from seeing him around the center working with the kids…what I didn’t know was that night would change my life forever….

Four years later – its 2:45AM and I look over lovingly at my husband thinking – how funny life is….I waited so long for my prince charming and little did I know that he would come in the form of Bob Metelus.  That night, on March 7, 2008 – I thought he was coming to pick me up to hang out for the night – what we didn’t realize was that we were just taking that first step in our journey together as soul mates and partners – for life.

Four years later – its 3:30AM and I look over at my husband….listening to the melodic sounds of his snores…some high pitches..some low…some breathy…some deep.  I’m annoyed. I want to sleep.  And I finally give in and with a firm/gentle shake/slap – I ask him with a sweet yet strong tone – to turn over (the snores that stem from sleeping on the back are generally the loudest). As he deliriously turns over, mumbling words to himself – I think to myself…this is life…this is love…this is marriage.  And I love me some him….

This is us on New Year’s Eve 2011 going into 2012…happy happy joy joy…You’ll be hearing so much more more…of The Mets!